A Partnership for Youth Development 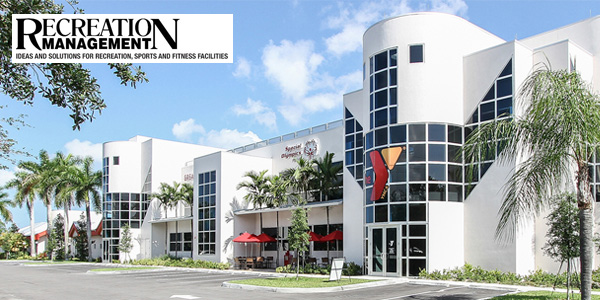 The lives of Paul Thein and Jay Howard didn’t figuratively change in a flash. They literally did. 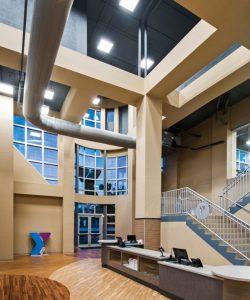 When lightning struck the heart of the Greater Naples YMCA Labor Day weekend in 2013, Thein, the new CEO of the facility, was bowling with his family. A phone call stopped them mid-game, and they arrived in time to see smoke billowing from a mile away and flames 50 feet high. What the fire started by the bolt didn’t destroy, the smoke and rain did. Seventy percent of the facility was lost, including a basketball gym and wellness center. Because of the holiday, the facility had been closed, and no one was injured. 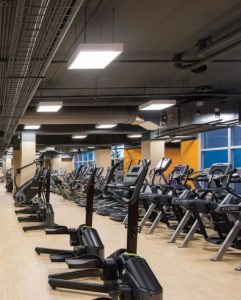 “Being on the ground for four months, and then watching the whole thing burn, you think of a lot of things,” Thein said. “Are we going to be able to recover from this?
What about the programs?”Howard, one of two principals of Naples-based construction company BUILD, knew of the fire almost immediately; the building is in a very visible location, and the YMCA had been a Naples institution for half a century.
Everyone in town knew within a day, and by Tuesday, a YMCA board member acquainted with Howard asked him for some preliminary advice on how to proceed.
“Naples has grown a lot, but is still a pretty tightknit community,” Howard said. “The YMCA is a part of that. When I was a kid I used to go to YMCA camps.”
Of course, there would be insurance coverage, but was there a chance despite the devastation to continue to serve the membership of an aging facility that had been reshuffling resources and planning for the future?
“People rely on our services because the Y is so much bigger than a fitness center,”
said Thein. “It’s really a socialization center point for the community. It’s the largest preschool provider for the Naples community. What’s the community going to be like without the Y?”
The answer came from the community: It’s going to be fine, as long as the Y returns. And it has, rising from the ashes larger and with more programs, and well on its way to doubling the 7,000-strong membership it had at the time of the fire.
The community didn’t just say it needed the YMCA; it showed it. Other facilities lent space for programs during the rebuild, and a Sunday school donated space for the preschool, which restarted just a week after the fire. In the immediate aftermath of the fire, enough revenue streams remained that no employees were laid off. 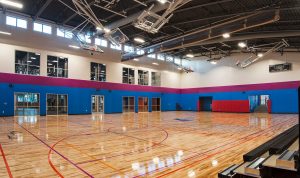 The crucial event was a $1.5 million matching grant from Best Buy founder Richard Schulze, which pushed the area to raise $5 million so that insurance money could go to the construction of something bigger and better, and not just equipment replacement.
The result is the 50,000-square-foot Richard M. Schulze Family Foundation Wellness Center, which includes: a 9,000-square-foot gymnasium; an on-demand group exercise room; a functional fitness room; a 45-bike spinning studio; a Spirit, Mind and Body Room; a wrestling and tumbling room; a 6,000-square-foot cardio and weights area; a 9,000-square-foot synthetic turf rooftop; a Childwatch and Youth Development Center; and
three conference rooms.
That’s not all: A local grocery, Wynn’s, opened a deli with healthy choices inside the wellness center, open to members and non-members.

The headquarters of the Collier County Special Olympics was in a small rented space away from central Naples, so the YMCA offered it space in the new building. The 20-acre campus also boasts a ropes course, a canoe pond and a tennis center that includes 10 courts of three different surfaces.
Not done yet: In the wellness center is a learning kitchen sponsored by grocery chain Publix. A pediatric medical center and diabetes education center are also additions springing from the rebuild. Thein says you could consider the entire project a thank-you gift to Naples.
“We designed it around a community,” he said.
Howard said the rebuild was like nothing else his company had done because of the pressure to get the YMCA fully functioning again. Six- and seven-day weeks, 10- to 12-hour days, were the norm, and favors were called in, though some didn’t have to be.
As much as the town’s citizens pitched in with donations—Schulze’s $1.5 million was matched in 40 days, said Thein—BUILD and the subcontractors did

what was necessary to reach a ribbon cutting for the good of the YMCA and Naples.
Designs were drawn during construction, not before, and Howard remembers making calls to ask someone to work on Christmas Day. In the end the wellness center was finished in seven months, two months ahead of schedule, said Howard. Amazingly, the building has won local and regional awards despite the challenges.
“You would never set out to do a project the way that this project was put together, but it had to happen,” Howard said. “With all that said, we still managed to rally the troops and get everybody to buy into the vision of getting the YMCA back open.”
Thein said there was help outside of the community as well, most notably from the national YMCA office and fitness equipment manufacturer Cybex, which offered Thein a showroom floor full of brand new equipment for below its manufacturing cost.
It’s not wrong to say that Labor Day lightning bolt created a monster; Thein said the 2016 budget includes $1 million in gross revenues, and he estimates within three years, membership will double again.
“I’m glad we made it through,” Thein said. “We’re blessed the community supported us, or I question if we’d have been able to make it.”