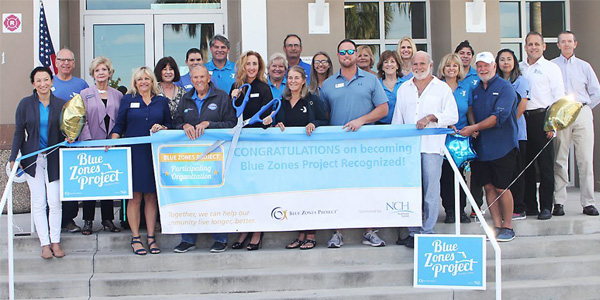 Anybody familiar with the Marco YMCA of South Collier and its “healthy living” mantra, won’t be surprised to learn that the organization now has Blue Zones Project designation. Official confirmation came recently during a ceremony outside the Y’s Youth Development Center.

A key element of the designation is an ongoing Y collaboration with Core Health Partners, with a mission of connecting “community to clinically proven health outcome programs through strategic partnerships,” according to CHP executive Paul Thein. “This includes providing experts from health, wellness and the medical industry to existing health facilities and HOAs.” CHP affiliated physical therapist, Angela Prodanov, was on hand after the formalities. “We have had a medically integrated service at the Y since last spring,” Prodanov said, “Offering nursing and nutrition services—by appointment. Next month, we will be able to accept physicians’ referrals and accept patients’ insurance. Previously, it was private pay.”

Earlier, Y board president Ashley Lupo welcomed the Blue Zones designation. “It provides access for all individuals, regardless of income,” she said. “It amounts to measurable, sustainable change for the community.”

CFP’s Thein also unveiled a 3D body imaging system that will be available as part of the program at the Y, starting early next year. Designed by NASA scientists, it measures bone density, body mass and overall fitness, and also provides risk analysis and risk reduction advice. 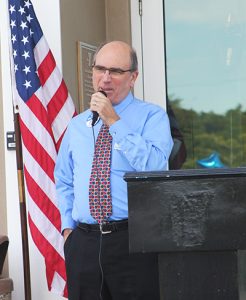 Blue Zones executive David Longfield-Smith talks about the value of the designation.

Also, Blue Zones Project’s David Longfield-Smith said in an earlier address that the initiative has grown from local to state to national and international in just five years. “Our goal is to genuinely keep you out of the hospital,” he said. “Locally, 670 organizations, schools and businesses have come aboard. The project wants to help people to implement healthier practices in both their personal and professional lives.”

Officially, the Blue Zones Project is described as a community-wide well-being improvement initiative to help make healthy choices easier for everyone in Southwest Florida.