Adrienn Balazs grew up in the Central European country of Hungary, first entering sports through gymnastics at the young age of 6, before her raw young talent was recognized and she was advanced on to an elite sports class. She later moved on to competitive  handball and competed for 10 years before a knee injury led to Adrienn discovering her real passion; rehab therapy.

Adrienn’s interests in physical therapy and rehab started in a time when she was the patient receiving physical therapy for her knee alongside other high level and pro athletes. Graduating high school with a nursing degree, Adrienn went on to college to peruse learn more about physical therapy.  In her college years she was involved with fitness and body building. Adrienn earned her degree in Physical Therapy in June of 2002 and few years later made the decision to move to the United States, earning her way as a private therapist and fitness trainer.

Concentrating on building her career in a new country, Adrien fell away from her personal high level training, in pursuit of learning a second language (English) and finding her my way in a new Country (the United States).  Adrienn taught herself English from watching movies and reading books.  Once comfortable in her transition to the United States Adrien met an inspirational personal trainer who served as a mentor and  provided the needed encouragement for her to re-engage in fitness and his sudden death motivated Adrien to open up her own company Movadria LLC. 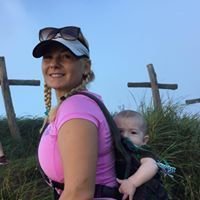 It was during this time same time when she engaged in competitive body building and running. Adrien was preparing for her first marathon (DC Marine Corps Marathon) when she faced another knee injury. Determined to keep her goal and not quit she completed her marathon training on a bike, before competing in her first half-marathon. Most amazing for Adrienn Balazs was running through the United States capital city as a new citizen and a business that really started to grow.  After completing this half-marathon, Adrien registered herself in her first triathlon in Key West Florida and taught herself swimming during the three week period between races.

Her love for triathlons and the challenge of it all captured her and soon it was all she could think of.  After competing in an Olympic distance race, and  first seeing an Ironman race in Cozumel Mexico, she decided to sign up for the Cozumel Ironman. She impressively took 27th in her age group out of about 170 people. It was during the training and preparation for the Ironman that her business exploded. After the Ironman the growth in Adrienn’s company led her  two adding two other massage therapist to her company.  Adrienn was living her American dream; owning a business and working with athletes in the area of sport recovery and massages.

Adrienn’s life took a turn on May 13th 2013 when she and a friend were in a serious car accident that killed her friend.  Adrienn’s injuys included an ACL replacement that left her not being able to work for month. That fall at the Kona Ironman, the ART team that inspired Adrienn to not let herself go, but instead pick herself back up and start the road to recovery, getting back to her passion of sports and business!

Motherhood, not injury,  led Adrien to close her Naples Florida business (entitled Movadria) and relocate to Guam! Adrien spent almost 5-years on the Island of Guam, raising her son became her priority with competing in triathlons became a distant second.  She transitioned her time from triathlon training to building her company and started to compete in the sport of Body Building.

Body Building helped Adrien take a deeper look at what life changes she needed to do to balance success as a mom/therapist/athlete. Since battling injuries from her car accident, Adrienn had to take therapy alongside her training routine. However, these definitely proved to compliment each other and her first show earned her a 3rd place in figure (Nov 2016). That taste of success pushed Adrien to want more and dig deeper. She made a strategic coaching change for body building and secured a mentor and a therapist to get her at the top of her game.  Just one year after her inaugural body building success and with the help of a great group of mentors, Adrienn Balazs got to stand on a bigger stage in Hawaii (November of 2017).  She picked up and a 3rd place on Guam and placed just 2 weeks later in another contest won overall in figure! In 2018 Adrienn Balazs received her National Card by winning at the Muscle Contest Competition in the Philippines. As her body building career grew so did her business. Her business (Movadria) expanded to work with world class top athletes, such as; UFC fighter Jon Tuck and Nike Team Runner Michael Berryman in his quest to get him ready for the World competition.  Adrienn was also chosen to treat Philippine actor Benjamin Alves through a severe ankle injury.  Adrienn Balazs client list also includes the National Rugby team, the National Soccer girls team.  She has helped many competitive athletes and teams including;  MMA fighters, girls volleyball teams, and the CrossFit athlete!

As the word of her treatments spread her company grew, as did her clientele of professional athletes.  Wanting to provide the best service, Adrienn went on earn new certifications by Active release in Nerve entrapment treatment, as well as fascial technique. Securing this knowledge increased results with her clients and in turn helped her business.  Her clients were recovering faster, resulting in cliental list of many top athletes and teams; such as Dr. Peter Lombard who competed in the Olympics Games (Rio 2016) and rowing team members preparing for competition at the Worlds (Tahiti 2018 Sith Khamvonga). Adrienn has been selected to works with multiple athletes, power lifters, triathletes, rowers who competed at the Samoan Games in 2019 and athletes who represented Guam at the CrossFit Games 2018.

Adrienn  was on the medical team at FIBA U17 Oceania Basketball Championships. She provided medical service at the Uproar Crossfit Games 2018 and the Girls Rugby Championship. She is credited with helping  Laura Nadeau get ready for the Kona Ironman World Championship (2018) and Timothy Welden to get conditioned for the Worlds Obstacle race at England 2018. Adrien worked with; Joan Jennings during her Strongman preparation (2018), and IFBB Pro Body Builder Gregory Monk.  She also helped power lifter Desiree Eay, who earned 1st place (56kg category) at LA Worlds Powerlifting Championship 2019.

So as my amazing years at Guam and a super successful  and fun years working with athletes and the general public. The goal has always been to help each of  them improve their lives and compete and compete at the highest level in their sports,  achieve their dreams!

Adrienn herself still competes.  She prepared for the Worlds WBFF show at the Bahamas and in August (2019)took 3rd place in Fitness Divs category. Adrienn Balaz has competed at a plethora of top world class shows with the best of the best in fitness and modeling! She is now back in Naples, Florida opening Movadria at the Center for Health Performance alongside Core Health Partners.  Movadria is ready to heal help your reach your goals while Adienn Balazs has set her sites on becoming a Pro Fitness Diva at WBFF.